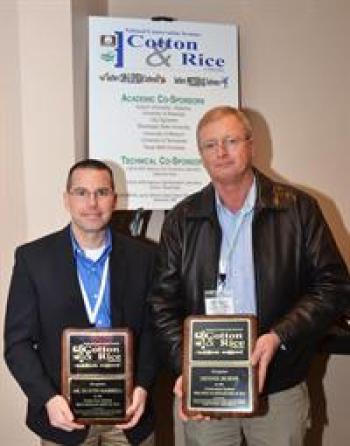 Two LSU AgCenter researchers were honored Thursday (Jan. 15) at the National Conservation Systems Cotton and Rice Conference in Baton Rouge. The event drew 574 people from Arkansas, Mississippi, Texas and Louisiana.
LSU AgCenter rice specialist Dustin Harrell received the Rice Researcher of the Year Award, and Dennis Burns, LSU AgCenter county agent in Tensas Parish, received the Precision Ag Researcher of the Year Award.
Harrell was recently named the Louisiana rice specialist following the retirement of Johnny Saichuk.
Harrell will continue his agronomy research projects at the AgCenter Rice Research Station near Crowley. Much of his work has focused on fertility, and he has identified the significance of zinc deficiency, shown that seeding rates for drill-seeded rice can be reduced, and demonstrated how nitrogen use efficiency can be improved.
When he received the award, Harrell credited his research associates Jacob Fluitt, James Leonards and retired Ron Reagan for their hard work. He also said checkoff funds paid by rice farmers are invaluable to the research. “Without the check-off funds, we wouldn’t be able to do the things we do,” he said.
Burns thanked his fellow researchers and farmers for assisting with his work. Burns’ efforts have helped farmers adopt precision agriculture technology, such as yield maps, soil electroconductivity and sensing devices to measure plant health. He has obtained $94,000 in grant funds for his work with farmers.
Harrell and Burns were among several LSU AgCenter researchers on the program at the two-day conference. Burns gave a presentation on precision agriculture applications to irrigation, and Harrell spoke about fertilizer timing.
Several Louisiana farmers gave an overview of their operations. Ross Hebert, of Vermilion Parish, discussed his ratoon crop strategy, while Wes Simon, of Acadia Parish, talked about ways of increasing yields and improving efficiency. John Owen, of Richland Parish, talked about his use of Clearfield rice.
Frank Hebert, of Rapides Parish, gave an overview of his approach to growing corn in Louisiana, and Marshall Hardwick, of Newellton, talked about using precision ag technology for growing cotton.
AgCenter plant pathologist Don Groth said rice farmers should scout their fields and evaluate their crop thoroughly before deciding whether a fungicide is necessary.
AgCenter soybean specialist Ron Levy presented details of his work on burning soybean fields after harvest. Even though burning is used to create a cleaner seedbed for stand establishment, he said, the practice has the disadvantage of depleting nutrients contained in the remaining crop material.
Mark Pousson, manager of the South Louisiana Rail Facility at Lacassine, said the amount of rough rice shipped to Mexico from the terminal continues to increase. Last year, he said, 250 rail cars of rough rice were loaded, compared to 130 cars in 2013. He said 24 cars will be loaded next month for a buyer who started doing business with the SLRF by ordering only four carloads.
Getting railways to provide rail cars is the biggest hurdle to increasing the amount shipped. “If we had the cars, we’d have another 200,” he said.
Pousson said some rice has been rejected before it was shipped to Mexico because it failed to meet buyers’ standards for cooking consistency and quality. But he said the facility has enough bin space to keep rice varieties separate.
Farmer Leigh Godchaux, of Abbeville, who also has interests in two rice mills, said quality concerns have led to a decrease in U.S. rice sales to Central America. She said half of the U.S. sales to Mexico have been lost, and Uruguayan rice is now considered the best. Iraq recently bought rice from Uruguay, paying $40 more then the U.S. price per ton.
Chalk is the biggest problem with American rice, she said, and it has come because of an increase in hybrids grown in the U.S. and not keeping different varieties separated after harvest.
“There needs to be an incentive for growers to plant the best,” she said.
Milo Hamilton, a rice marketing consultant, said rice prices probably won’t decline much more, adding that rice stocks are declining worldwide, and India and China will be importing rice in the coming years.
But the strong American dollar makes U.S. grain more expensive for foreign buyers, he said.
California’s water problems have helped Gulf States rice growers with a demand for medium-grain rice.
Stuart Hoetger, Hamilton’s associate, said Taiwan has bought Louisiana-grown medium-grain rice because California medium-grain rice was not available last year.
But Hoetger recommended farmers wait before deciding on this year’s medium-grain acreage because California’s water problems could be solved with adequate snowfall. “Don’t make any medium-grain decisions without a contract,” he said. “The next six weeks will tell.”
Ray Schexnayder, Pointe Coupee Parish farmer and director of the United Soybean Board, told the gathering about the herbicide-resistant weed campaign “Take Action” to spread the word on addressing resistance issues. The campaign uses advertising, fact sheets and handouts, and the website, www.takeactiononweeds.com.
The campaign urges farmers to be aggressive against stubborn weeds, such as Palmer amaranth, by using several strategies to combat the spread. “There’s no silver bullet for managing resistant weeds,” Schexnayder said.
AgCenter weed scientist Daniel Stephenson said some herbicides are still effective on stubborn weeds that have developed resistance. A key factor in controlling problem weeds is eliminating seed production, either by mowing or with herbicides such as paraqua.