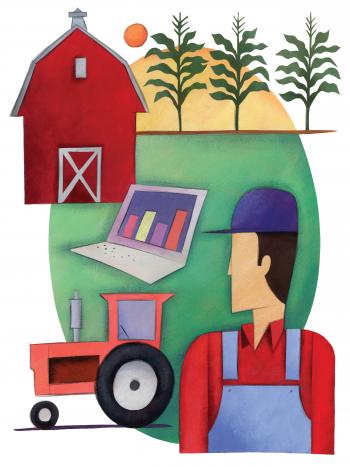 The recent surge of cold weather could be damaging to Louisiana’s wheat crop, depending on the severity and duration of the below-freezing temperatures, according to LSU AgCenter wheat specialist Josh Lofton.
“The good thing is, it warmed up a lot more during the day compared to what was predicted,” Lofton said.
The amount of damage can’t be determined for a week to 10 days. Damaged tissue will show signs of discoloration and wilting, he said.
The relatively mild winter allowed wheat to compensate for poor planting conditions. “However, recent colder conditions have all but stopped growth,” Lofton said.
A number of factors make it difficult to predict exactly what effects the cold will have on a crop. Soil temperature and moisture, the amount of foliage covering the growth points, the plant growth stage and wind are among the considerations, he said.
Wheat is least susceptible to cold during the tillering stage, he said. “Wheat becomes more susceptible to cold damage as the crop progresses towards the heading stage and is very susceptible to cold temperatures during heading.”
Most fields are in the jointing-growth stage or close to it, which signals the beginning phase of reproductive plant growth, and some are further along in growth with one or two nodes developed.
Wheat at joint stage can suffer moderate to severe losses when the temperature is 24 degrees or lower for more than two hours, Lofton said, with death of the plant’s growth point being the predominant concern. He said it appears cold temperatures for most of Louisiana only reached that threshold in a few isolated areas.
To find out if any damage occurred, the most advanced plants can be cut open to find growing points.
If the tissue is white, firm and fleshy, the plant will be productive, Lofton explained.
“If the growing point is discolored and limp, the growing point is no longer active, and that tiller will cease to grow and produce,” he said.
Excessive rainfall has slowed wheat growth, Lofton said. Heavy rain followed by humid days has set up ideal conditions for development of diseases, specifically stripe rust.
So far, only isolated outbreaks of the disease have been found. “The conditions are ripe for it to progress,” he said.
This year’s state wheat acreage is down to fewer than 200,000 acres compared with last year’s crop of 210,000 acres, he said.