For Outstanding Master Farmer, it's about the land 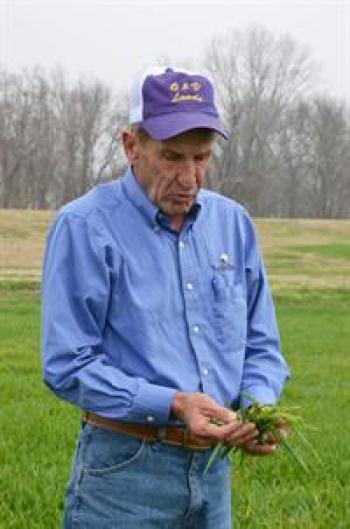 Ruben Dauzat examines his wheat crop near Simmesport. He practices no-till methods and regularly rotates crops that includes grain sorghum, corn and soybeans. Depressed cotton prices have kept him from planting that option in the past few years. Photo by Bruce Schultz

Ruben Dauzat, chosen as the Outstanding Master Farmer of the Year for 2014, wants to make the best crop possible each growing season, but he doesn’t forget the long-term goal of conservation of the land and water.
“Our names might be on a piece of paper, but we don’t own the land. We’re just here for a short period of time,” said Dauzat. “Everything we do on our farm is concentrated on conservation.”
He grows corn, soybeans, grain sorghum, wheat, cotton and cattle on the 1,200-acre Wayside Farms near Simmesport in Avoyelles Parish.
Dauzat said experiences such as watching his granddaughter catching her first fish or his grandson bagging his first squirrel are priceless. “Everything depends on conservation,” he said. “Those are things you won’t have if you don’t manage your resources properly. The little bit of good I’m doing as a steward of the land will remain for many generations.”
Dauzat was given the award on Jan. 13 during the annual convention of the Louisiana Association of Conservation Districts in Baton Rouge when nine other farmers were given certification as Master Farmers.
The Louisiana Master Farmer Program helps farmers learn the latest in conservation practices. Sponsors of the program are the LSU AgCenter, which provides the education, the Louisiana Department of Agriculture and Forestry, the U.S. Department of Agriculture Natural Resources Conservation Service, the Louisiana Farm Bureau and the Louisiana Cattlemen’s Association.
Dauzat said participating in the Louisiana Master Farmer Program affirmed that he’s on the right track. “Master Farmer rededicated me to conservation. I knew I was doing the right things, but it made me do it better and more of it.”
He is sold on the technology of modern farm equipment and realizes the benefit for conservation purposes. He uses grid soil sampling to provide data, which allows variable fertilizer rate applications. “You don’t just blanket a field with fertilizer,” he said.
Variable rate fertilizer application “has helped so much yield-wise. We’re using what we need, where we need it,” he said.
Dauzat practices the no-till approach when he can. He doesn’t plow the fields in the fall. After harvest, he discs the remaining vegetation into the soil to contribute to organic matter, and he allows winter weeds to act as a cover crop.
All the land is in constant rotation. He’s convinced the practice helps with pest control, as well as soil fertility. “This field two years ago was in milo. Last year, it was in soybeans,” he said.
After harvest of a 150-acre wheat crop, soybeans will be planted into the stubble on raised beds 36 inches apart. “Next year, it will rotate to corn.”
Warm spells have helped the current wheat crop grow. “So far, we’re free of any disease.”
But Dauzat is glad he didn’t plant more wheat. He has sometimes planted as much as 500 acres with prices barely above $5 a bushel. “We like to shoot for at least $6,” he said.
Dauzat is experimenting with a 40-acre tillage radish patch. The radishes are inedible but Dauzat planted them to improve the soil. Dauzat said the plant’s large taproot creates a channel that will allow moisture to penetrate deep into the hardpan soil layer.
Before planting this year’s corn crop, Dauzat will use herbicide to get rid of the radishes and plant corn into the unplowed rows.
He learned about the radish cover crop from Midwest farmers while attending a conference of the National Association of Conservation Districts. He serves as a board member for that groups, and he is president of the Louisiana Association of Conservation Districts.
Dauzat, also a graduate of the LSU Ag Leadership program, was an easy choice for the Outstanding Master Farmer Award, said Donna Morgan, Louisiana Master Farmer Program extension associate.
“He’s been pretty involved with soil and water conservation, and we’ve had field days at his farm,” she said.
Many farmers, like Dauzat, use a variety of conservation practices, she said. “A lot of people have done more of these practices than they are aware of.”
But, she said, the Master Farmer Program documents the conservation work.
More Master Farmer sessions will be conducted in 2015, Morgan said.
“We are planning to have another Master Farmer University, and it offers Phase I and II (of a three-phase program) back to back on consecutive days.”