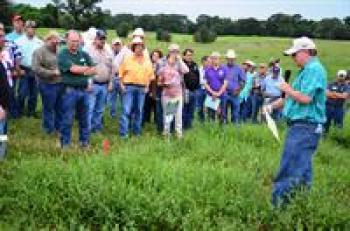 LSU AgCenter forage specialist Ed Twidwell talks about herbicides for controlling weeds in pastures at a field day on Aug. 21 in Cade, Louisiana . Twidwell said ryegrass planting time is approaching, and soil analyses should be conducted to determine which fertilizers are needed. (Photo by Bruce Schultz)

This has been a good year for weeds to flourish, but that also means killing the unwanted plants in pastures has been easier than usual, said LSU AgCenter weed scientist Ron Strahan.
In a presentation on Aug. 21 at the LSU AgCenter pasture and hay weed tour at the held University of Louisiana at Lafayette’s Cade Farm, Strahan said weeds usually struggle in the late summer heat. But this summer’s rains and milder temperatures have been favorable for plant growth, and herbicides work best when plants are actively growing and not stressed by drought.
“It’s very unusual. We’re in late August and everything is green and still pretty easy to kill,” he said.
A number of chemical options are available to kill weeds and brush growing along fence lines. Remedy is a good product to kill briars, he said, while Pasturegard is effective on weeds and does not require a pesticide applicator’s license to buy.
Regulations in many northern parishes restrict the use of 2,4-D, but other products such as Surmount are available. Strahan warned, however, that many of these chemicals can kill non-target trees. “It’s not going to know your oak tree from a tallow tree,” he said.
Imazapyr is a good product for controlling Chinese privet growing on a fencerow, he said, but it also can kill desired trees if it is applied within the drip line.
Virginia buttonweed, a menace to residential lawns, is becoming more of a problem in pastures, according to Strahan.
The weed can be treated in May or June with the herbicides Cimarron Max or Grazon P+D with a quart of 2,4-D, but he said regardless what is used, more than one treatment may be required. “It’s not a one-shot treatment.”
LSU AgCenter forage specialist Ed Twidwell said a study on the best ways of controlling broomsedge is being conducted near Denham Springs, Abbeville and Baton Rouge.
An insect called the bermudagrass stem maggot could threaten Louisiana pastures. It was first discovered in Georgia in 2010, but it was found in Washington Parish recently and in a St. Martin Parish field three years ago, he said.
An infested field looks like it was damaged by frost, Twidwell said. “If it’s close to harvest, go ahead and harvest.”
Armyworms are more of a common problem in pastures this year, he said.
Ryegrass planting is approaching, Twidwell said, and now is a good time to take soil samples. He recommended planting ryegrass in a prepared seedbed around September 20. Ryegrass can also be over-seeded into a perennial summer grass sod in mid-October.
Stan Dutile, LSU AgCenter county agent in Lafayette Parish, gave details about hay storage.
Storage in a barn is best because the losses in dry matter and quality that result from outdoor storage can be reduced, Dutile said. If outdoor storage is the only option, a location should be chosen that is well-drained and not shaded. Hay should be baled tightly and have good density to help shed water.
Bales should be moved to a storage area immediately after baling, he said. They should be aligned in north-south rows up and down slopes, with the ends butted against each other. But bales should not be on hill tops where they could be struck by lightning.
Mark Simon, manager of the ULL Cade Farm, said following those guidelines could mean the difference in having enough hay for several head of cattle a month.
AgCenter beef economist Ross Pruitt said cattle prices should remain good for several years because of tight supplies that can be blamed on a drought afflicting the western states.
“There’s not a whole lot of room out there for cattle prices to fall,” Pruitt said.
Poultry production has been below expectations this year, and a pig virus has resulted in less pork on the market, he said.
The price for 600-pound Louisiana steers should hit $205 to $235 per hundredweight next year, he said, compared to the $190-200 this year. “I’m probably on the conservative side with that.”