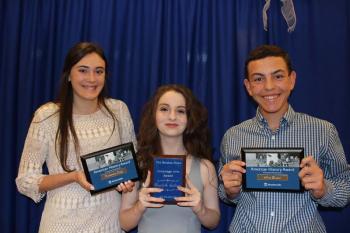 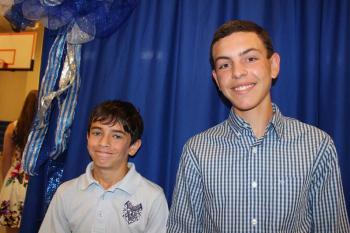 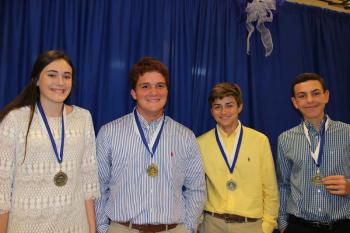 St. Edmund School held its annual seventh-and eighth-grade awards program May 27 recognizing and honoring students who excelled in academics and extra curricular activities.
On the program, awards were given to students who maintained all “A’s” Principal Honor Roll, A & B teacher’s honor roll.
Accelerated Readers recipients were recognized. Those receiving top Accelerated Reader points of 125 points and above were given certificates.
Class officers of seventh and eighth-grades were recognized with certificates.
Athletics awards were presented to all students participating in all sports (football, softball, track, baseball, basketball, golf, cross country, track, tennis, cheerleading, Jayettes).
A new award the ACSSAA (Association Christian Schools Athletic Achievement) leadership awards in football were presented to two students. One award was given to an eighth-grader who excelled academically while playing two or more sports, and the second award was given to the highest GPA student playing football.
The Woodman of the World History Award is given to students who achieves and earns the highest GPA in American History. Receiving this honor was Katherine Sittig and Alex Dupre.
The Eunice News Language, Arts award is given to a student who highly excels and in English and Language. Elizabeth Soileau earned the highest GPA in English.
The distinquished Clare Francois Montz Memorial Award is given to eighth-grade students who have excelled academically in English, science, math and religion. Katherine Sittig received the English award; Alex Dupre was the recipient of the science award, Joshua Smith received the math award; and Will Turk achieved the religion award.
The Young Christian Awards are given to students who are recognized as highest standards and Christian values in school, who possess hard working skills, respect others, and show compassion for others. This year’s recipients were Alex Fontenot, seventh grader; and Alex Dupre.