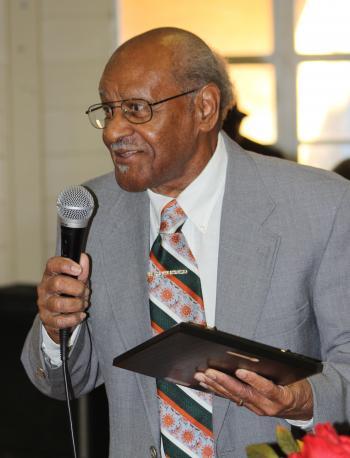 Husband and wife duo Edward Francois and his wife Ardessie Chase Francois were both recognized for their work in the community during the 29th annual Martin Luther King, Jr. city-wide celebration this past weekend.
Edward was this year’s recipient of the 2015 Dr. Martin Luther King, Jr. Award. Originally from New Orleans, he is a graduate of Xavier University, and he holds a degree in instrumental music. He joined the St. Landry Parish School system in 1956 as band director at Charles Drew High School. Following integration in St. Landry Parish, he became the first African American band director at Eunice High School. For 30 years, he taught instrumental music and directed the bands at EHS and Eunice Junior High School.
Edward is also a Korean War veteran. He has been a member of the Knights of Peter Claver at St. Mathilda’s Church for 56 years, and he also played the organ at the church for 52 years before retiring.
Ardessie, originally from Baton Rouge, is a graduate of Southern University, where she studied music and English. She joined the St. Landry Parish School system in 1961 as a teacher at Charles Drew High School and later taught at Central Middle School and Eunice Jr. High School. In her 38 years in education, she taught English, reading and music. Ardessie has been a member of the Knights of Peter Claver Lady’s Auxiliary at St. Mathilda’s Church for 52 years, and she has been a member of the National Association of University Women since 1984.
“I did it from the heart, and I will continue to do it,” Ardessie, a former school teacher, said as she received a plaque for “Service Beyond the Call of Duty.” “Because of my disabilities, I cannot do everything, but I will continue to do what I can.”
The awards were announced Sunday afternoon by Carlton N. Frank, Jr., chairman, and presented by he and Jacqueline Vallare.
“When we called on this young lady, she never said ‘no’ and when she couldn’t come to us, we went to her home,” Frank said as he announced the award.
The couple are the parents of six children, and they also have 13 grand children and one great-grandchild, and the couple have touched the lives of countless other children during their careers in education.
“Both of us feel that the children we taught, we look at them as our own children, like part of the family,” Ardessie said. “We treat them like family. We see them in town, and they feel comfortable visiting with us anytime. Our doors are open to our friends and former students.”
“We have a listening ear. They are our children in a sense, and many of them still come to visit and for advice.”
Rev. James Robert Edwards was also awarded the Humanitarian Plaque during the program.
The weekend’s “Unity for the Community” celebration started with the third annual prayer breakfast Saturday morning at the Southeast Community Center, and about 75 people attended the event. Prayer leaders included Rev. Gregory Fontenot, pastor of Greater Golden Light Baptist Church, Rev. Michael Tatman, Miranda Arvie and Rev. Tim Moffett, pastor of First Baptist Church of Eunice. Guest speaker was Rev. Woody Gunnels, pastor at New Hope Fellowship.
“I was asked to speak about race reconciliation today,” Gunnels said. “In times like these, we might consider it to be an unattainable dream, but it is not. Dr. King spent and gave his life in pursuit of racial equality. Today, we have at least a measure of legal equality, but we do not enjoy the full pleasure and treasure between our two races. This is why there needs to be racial reconciliation.”
“Must we let his work stop now? Should we let this go on?”
In Gunnels’ eyes, racial reconciliation must begin in the church.
“It must begin between those of us who show faith in Jesus Christ,” he said. “We cannot push each other away. We must embrace each other with open arms. Events like this are wonderful steps toward racial reconciliation. It cannot be accomplished by simply tolerating each other. How can we move forward if we are still holding something from the past against each other? We must love one another.”
“There has been a lot of hatred for the last few years between our races. It has gone on so long that some refuse to even try to love one another.”
The weekend’s celebrations continued with a parade Sunday afternoon, and following the parade, about 150 community members gathered at the Southeast Community Center for the annual program.
Dwanetta Dupre-Scott, principal of East Elementary School, served as the program’s Messenger speaker.
“I love words,” Dupre-Scott said. “Words can inspire a person. Words can also bring you up, down and turn you around.”
“Dr. Martin Luther King had a prolific way of using words.”
Dupre-Scott recalled listening to Dr. King’s “I Have a Dream” speech as a child and learning about what the man stood for during his lifetime.
“Unite, present, implement, execute,” she said. “How did he (Dr. King) do this? Through his words. The man had it going on.”
“How we use words matters in our community as people,” Dupre-Scott continued. “We need to build each other up, not tear each other down. Words are powerful, but they must be accompanied by action.”
The program also featured performances by several local singers as well as praise dances by the Angels of Zion Praise Team from New Zion Baptist Church and the St. Mathilda Praise Dancers. Three $500 Dr. Martin Luther King, Jr. scholarships were awarded to local students.