Edwards: Cuts may worsen, but no special session 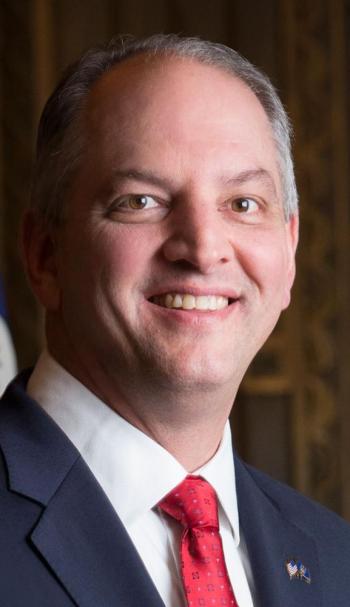 Given the mounting concern over the state’s incoming revenue this fiscal year, several conversations at high levels have been had about a potential special session of the Louisiana Legislature, but it’s unlikely that one will actually be called, according to Gov. John Bel Edwards.
The governor discussed Louisiana’s budget challenges, among other topics, during his recent appearance on The LaPolitics Report podcast.
Speculation about a special session has been swirling since the state discovered it had a $313 million deficit to carry over from last fiscal year — a gap that is now being addressed with midyear budget cuts.
“Informally it has been (discussed), both between certain members of the Legislature and myself and a little discussion with members of my administration,” Edwards said. “But as of right now there are no plans for a special session. I think the chances are more likely than not we will not have a special session.”
Edwards did say he is concerned about incoming revenue for this fiscal year. He said he is keeping his “fingers crossed” for an uptick in sales tax collections in October, but the rest of the fiscal year remains an unknown.
“The additional cuts we are going to make this year based on the deficit last year when we closed the books, and potentially a problem in the current fiscal year where the revenue is not coming in as anticipated in the fiscal notes, are going to be really nasty cuts,” he said.
GOP lawmakers meet privately
Republican lawmakers in the state House have been gathering together to plan for the 2017 regular session, which is when the Legislature is expected to debate solutions to a loss of $1.5 billion in temporary tax money.
Freshmen GOP members huddled first on Nov. 3 to hear talks from House Speaker Taylor Barras, R-New Iberia, and Rep. Lance Harris, R-Alexandria, the chairman of the Republican delegation in the lower chamber.
Those who attended say some voiced a need to be more respectful of each other’s opinions and they explored ways that Republicans could work with the Edwards Administration.
But the big push behind last week’s meeting of GOP freshmen was the creation of a longterm policy plan that would stretch out to 2028, when most of the newbies will be in their final term should they be re-elected twice.
The entire delegation met the next day, on Nov. 4 to start developing the party’s full plan for the 2017 session.
Harris had already started fleshing out the plan during regional meetings with lawmakers, but Friday was the first time the entire delegation gathered together for planning purposes.
It’s also the beginning of the buildup to the March 15 Republican retreat that will be held prior to the next regular session. That’s when, presumably, Republicans will coalesce around a final plan.
Group to address redistricting
Last month President Barack Obama and former Attorney General Eric Holder announced they would be leading a national redistricting reform effort as a way to battle the hold they contend Republicans have on the remapping process in U.S. states.
Redistricting takes place every 10 years and involves the redrawing of district lines for elections based on population changes recorded by the U.S. Census.
To piggyback on the drive by national Democrats, New Orleans attorney Matt Bailey has created a group called Fair Districts Louisiana to bring the debate to the Bayou State.
That effort is currently confined to Facebook, but more announcements are expected in the future.
Scalise in Clinton email leak
The latest avalanche of emails connected to Hillary Clinton and made public by WikiLeaks includes one missive that has references to U.S. House Majority Whip Steve Scalise of Jefferson Parish.
The email refers to an amendment that was sponsored by Scalise in 2011 to get rid of some of the so-called czars that were being appointed by President Barack Obama for things like climate change and health reform.
At the time, Scalise’s team referred to it as the “Sack the Czars” amendment.
In the email, there’s a question posed by Clinton, through an intermediary, asking how the amendment might effect some “special envoys.”
It’s far from scandalous and barely notable, but Scalise boosters have jokingly pointed out that appearing in a political email leak — in this political environment — means the majority whip has finally made the big time.
Chemical association has new head
The Louisiana Chemical Association and Louisiana Chemical Industry Alliance recently announced the appointment of Greg Bowser as president of the two organizations.
In assuming his new role, Bowser, a former LSU defensive lineman, becomes the first African American to lead a major Louisiana statewide business trade association.
Bowser replaces Dan Borné, who is retiring after serving 28 years as head of the associations.
Bowser moves up to the presidency of the organizations after serving as executive vice president for LCA and LCIA since 2011. He joined the organizations in 1991 and has directed their governmental affairs activities.
They Said It
“That would probably be the Cohiba. It’s sitting on my desk right now. It’s very fresh. It’s only a week old. Not that I’m smoking it in here, but I can smell it.”
—Agriculture Commissioner Mike Strain, on his favorite Cuban cigar, in the Business Report
“They’ve got to throw everything but the kitchen sink at each other.”
—WWL-TV political analyst Clancy DuBos, on what to expect out of November’s political ads
For more Louisiana political news, visit www.LaPolitics.com or follow Jeremy Alford on Twitter @LaPoliticsNow.