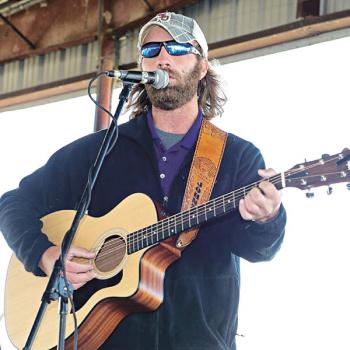 By Darrel LeJeune The Basile Weekly

The past few weeks have been been devastating for many flooded communities in south Louisiana, but amidst the sorrow, rain, and remaining mud, music was and still is able to lift those mourning their losses.
An inspired song by Eunice’s Josh Johnson, written after the floods, has touched many here in the area and beyond. When Johnson played “Thicker Than High Water” in a video on his Facebook page for the first time, the song immediately resonated with everyone who watched it. Within a week, it has been viewed nearly a quarter of a million times.
The natural progression of the song for Johnson was to get it recorded. So early last week, musician and producer Tony Ardoin assisted in putting it all together and the result is what you will hear at Johnson’s website joshjohnsoncountry.com. The song is getting airtime on KBON 101.1 and 97.3 the Dawg radio stations. It is also available for purchase on iTunes, Google Play, Spotify Amazon, and several other music download sites.
Johnson was born in New Iberia and raised in a rural area of Eunice called Patasa. At age 27, he spends his days working as a driver for Riceland Crawfish and devotes his nights to his music.  According to Johnson’s website, “his music is real, old-school country; the way it should be played.”
“He began writing and singing in his early 20s and has always loved the old country style.  His influences are many, but he credits the late Keith Whitley as the man who made him want to be a country singer.  He has played various local bars, restaurants, festivals, even competing in the 97.3 The Dawg Country Showdown at Cowboys Nightclub in Scott in 2015 and 2016,” says the website.
The singer, songwriter, musician is the son of Basile native Otis Johnson and has been playing guitar and accordion for the past several years. He sings vocals in both English and French and is well-known in Basile Mardi Gras circles for playing the accordion for the Mardi Gras run and singing solo on “The Basile Mardi Gras Song” when needed.