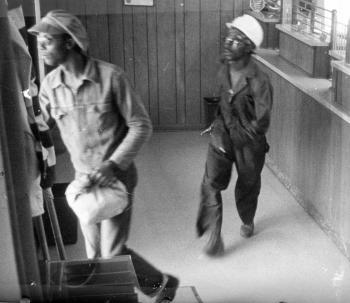 Clutching a bag containing nearly $11,000 in cash, Preston Demouchet (left) flees the scene of a bank robbery that took the life of bank teller Beverly Chauffe. Following closely, gun clearly visible, is Jerry Francis, who is seeking parole under the “old timer law” for inmates who have served 20 years and reached the age of 45. Francis, who was 17 at the time, has been in prison for 38 years. (16th Judicial District Court)

From the evidence at hand, the two robbers had a simple MO. They would case the place, maybe come and go several times, but not pull the chrome-plated .38 Special until there was only one employee present.
Then they would make the employee lay down and shoot him or her in the head.
On May 26, 1976, the victim was Beverly Chauffe, 46, the lone teller in the little St. Martin Bank & Trust branch in Parks. Chauffe died from the gunshot wound, but not for some 16 months during which time she remained incapacitated.
A bank official said the pair got away with $10,917.
Jerry Paul Francis, 17, and Preston George Demouchet Jr., 24, both of New Iberia, were arrested by the FBI in Houston after Francis’ mother recognized her son in the photos taken by the bank’s security camera and called police.
Francis and Demouchet were initially charged with armed robbery, attempted murder and a federal charge of bank robbery. For reasons now lost to the record, they were tried on the armed robbery charge only, in Franklin on a change of venue.
After four days of testimony and some striking photos of the robbery in progress, the two were convicted and sentenced to 99 years without benefit of parole.
They were also at some point convicted in the May 10, 1976, robbery of a hardware store in Rayne in which the clerk, 74-year-old Curtis Johnson, was shot in the head and killed. The precise disposition in that case is buried in the archives of the 15th Judicial District Court in Crowley but employees of the clerk of court’s office there say both men are appealing convictions in the case.
Demouchet, particularly, is well-known to the clerks in both Crowley and Franklin for over 30 years of near-weekly letters seeing redress in his case.
At the time of their sentencing and for years afterward, 99 years was a life sentence. Even after the Louisiana Legislature established the “old timers law,” easing the way to parole for prisoners who have served 20 years and reached the age of 45, armed robbers remained specifically ineligible.
But litigation hacked away at that until a recent case restored parole rights to all prisoners convicted of armed robbery and seeking eligibility under the state “old timers law.”
On Thursday, March 13, Jerry Paul Francis, now age 55 or 56, having served some 38 years in the robbery of the St. Martin Bank & Trust, will come before the state Parole Board to seek release from prison.
Chester Cedars, assistant district attorney for St. Martin Parish, said he will go to Baton Rouge and fight Francis’ release “tooth and nail.”
He said back in 1976, Francis and Demouchet couldn’t be charged with murder in the Chauffe case because Louisiana at that time adhered to the old common law standard that a death proceeding one year and a day after an event that caused it could not be deemed murder, even though murder is clearly what it was.
Louisiana, like a lot of other jurisdictions, has since abandoned that practice.
The death of the hardware clerk in Rayne, Curtis Johnson, might further taint Francis’ efforts to go free.
The record of the trial in Franklin is not clear on who pulled the trigger and eventually killed Beverly Chauffe, but in the security photos, both men are variously seen with a gun in hand.