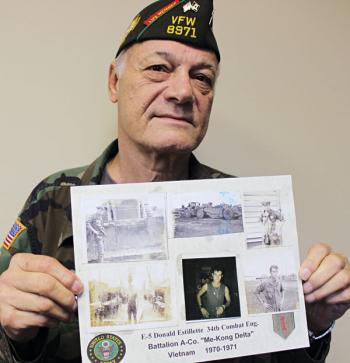 There will be a Veterans Day outdoor ceremony at 11 a.m. Friday at the VFW tank memorial, located at U.S. 190 East.
Local veterans will be honored and recognized by the post. The ceremony is sponsored by VFW Post 8971, DAV, and American Legion Post 129.
Boy Scouts will open the ceremony.
Terry Matte, Post commander at the VFW Post 8971, said there will be guest speakers for the program. Speakers will include Maj. Eddie Thibodeaux, public information officer and Crime Stoppers spokesman forSt. Landry Parish Sheriff’s office, and State Rep. Phillip DeVillier.
At the conclusion of the ceremony there will be a flag disposal.
A gumbo will be served inside the Post.
All veterans and the public are invited.
The ceremony honors veterans such as Donald Estillette, VFW Post 8971 chaplain, for some 30-plus years.
Estillette served as an E-5, a 34th Combat Engineer, in Battalion A-Company in Vietnam from April 1970 to May1971.
Estillette, born on April 14, 1950, in Eunice to Wilson and Ethel Thibodeaux Estillette, graduated from Eunice High School in 1968.
After receiving his high school diploma, Estillette worked as an apprentice butcher for Kroger Supermarket. “I worked under my uncle in Baton Rouge. I stayed working there for a while,”
Estillette was informed that his mother received an important piece of mail at home. “It was a certified letter, draft letter.”
Estillette, 19, enlisted for the Army in August 1969.
“I went off to New Orleans for physicals required. Then basic training at Fort Polk, for two months.”
Estillette then was sent to Fort Leonard Wood, Missouri, for training as an operator for heavy equipment. “There I was required for advanced training and licensing.”
Estillette next stop was working on big projects as an operator in Colorado Springs, Colorado, at the Air Force Academy. He remained there for six months.
Estillette said, “Then I had leave. Went home for 30 days and spent time with family,”
Estillette’s work experiences as a heavy equipment operator during Vietnam was to build bridges, roads, extend and widen roads. He added, “Woke up few times to shots. It was called Red Alert. Had my work tractor practically blown up. Was hit on the motor.”
Estillette’s rank was later promoted to E-6 staff sergeant.
Estillette recalls going home for good after serving in the military, “It was Mother’s Day, May of 1971, and my grandmother’s birthday.”
Estillette continues to serve and firmly believes in giving back to his community and his veterans.
He is the chaplain of the VFW Post 8971 and District 7 chaplain. He also serves as chaplain of the American Legion Post 129 in Eunice.
Estillette has received numerous post awards and honors during the past 30-plus years.
Estillette, along with his fellow post members, pay visits to schools, nursing homes, veterans homes.
“Veterans Day and Memorial Day ceremonies are part of our heart and lives.. It’s to honor and recognize all veterans,” he said.
Estillette added, “I receive invitations to serve as chaplain during funerals, and grave site memorials. Myself, and other Post members present a small ceremony, and we give Bibles and flags to these families.
“We volunteer for bingo games at nursing homes, local and near by, and at the VA in Jennings,” he said.
Estillette firmly believes in, “Veterans take care of veterans.”