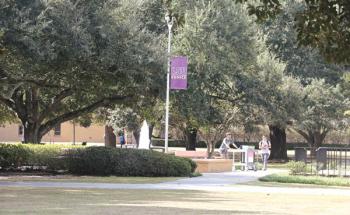 How a cut in TOPS payments will affect LSUE is unknown. TOPS currently pays 93 percent of tuition. For the spring semester, TOPS will pay about 42 percent. The scene is from the LSUE campus. (Photo by Harlan Kirgan)

LSUE, which experienced nearly a 16 percent increase in enrollment this fall, now faces the question about how enrollment will be affected by a cut in TOPS payments.
In the spring semester, TOPS will pay for 41.8 percent of the tuition.
Van Reed, LSUE public information officer, said, “We are kind of worried students are not paying attention to that yet.”
Registration is taking place for the spring semester, he said. “I think once students register and see their fee bills that’s when it is going to click in with “what happened to my TOPS?’”
In the fall, TOPS paid $1,261, but in the spring students will only receive $567.
“We don’t know the impact yet,” Reed said of the reduction in TOPS payments.
“Will people leave Baton Rouge and UL systems to start herewhere it is cheaper?” he said.
Kate Herke, public information officer for the Louisiana Office of Student Financial Assistance, said legislators approved 70 percent of the full funding this year.
It’s the first time TOPS scholarships do not cover the cost of tuition for students attending Louisiana’s public colleges and universities.
There are about 51,000 students receiving TOPS in the 2016-17 school year.
LSUE student Heidi Pitre said she hasn’t heard from many students about the TOPS reduction.
“I’ve heard a couple of people actually set up gofundme pages because they can’t afford to go to college if TOPS gets cut that much,” she said.
Pitre, of Eunice, said LSUE’s lower-priced tuition was a factor in her selecting the school.
“You have to find what is in your budget range and what you can afford as a student because not only do you have to look at tuition, you have to get books, room and board and things like that. My parents live in town, so it was easier,” he said.
LSUE had 512 students who received a total of $665,547 this fall. If TOPS had been fully funded they would have received $718,256.
Annual resident tuition and fees for 12 hours per semester at LSUE is $4,258, according to information at the Board of Regents website. At LSU Baton Rouge, the cost is $10,748.
The University of Louisiana Lafayette cost is $9,450.
The TOPS payment at LSU Baton Rouge this fall, which is at 93 percent of full funding, is $3,473. In the spring, the payment drops to $1,560.
At the UL Lafayette, this fall’s payment is $2,516, which drops to $1,130 in the spring.
The college scholarship program will be spared further cuts despite a $312 million state deficit, according to news reports.
Commissioner of Administration Jay Dardenne has said he does not think Gov. John Bel Edwards will support across the board budget 7 percent cuts. Instead, selective cuts will be sought, he said.
Reed said it is unknown what TOPS will pay next year.
The Taylor Opportunity Program for Students is a merit-based scholarship program started in 1989 with an income cap. In 1997, the income cap was removed and all students became eligible if they met merit requirements.