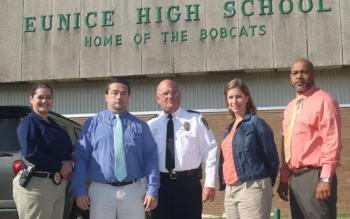 Truancy rates for Eunice’s seven public schools have dropped since Eunice Police and school officials began a program that intervenes soon after a pattern of absences develops. Among the schools participating is Eunice High where administrators and police gathered for a photo on Tuesday. From left, are Sgt. Stephanie Myers, Principal Mitch Fontenot, Police Chief Randy Fontenot, Vice Principal Kristy McLemore and Vice Principal Brett Simien. (Photo by Harlan Kirga

Success against truancy
Truancy rates for Eunice’s seven public schools have dropped since Eunice Police and school officials began a program that intervenes soon after a pattern of absences develops. Among the schools participating is Eunice High where administrators and police gathered for a photo on Tuesday. From left, are Sgt. Stephanie Myers, Principal Mitch Fontenot, Police Chief Randy Fontenot, Vice Principal Kristy McLemore and Vice Principal Brett Simien. (Photo by Harlan Kirgan)

A focus on reducing truancy at Eunice’s public schools is proving successful.
Eunice Police Chief Randy Fontenot said, “Truancy reports have gone down quite a bit in the last month. Apparently the program that is in place has been very effective thanks to the schools, the principals, the parents and the cooperation of the court.”
Sgt. Stephanie Myers said she was almost giddy about the downturn in truancies.
Previously in a two-week period up to 50 truancies would be reported. In the latest two-week period, there were seven truancy reports, she said.
Myers, juvenile officer, said she is contacted after a student has five unexcused absences.
“I contact the families and let them know and sit down with them to go over the absences with them and say ‘this is where your child is at,’” she said. “I let them know that everybody’s common goal is to make sure that their child gets the best education they can get and that includes being in school.”
About 95 percent of the parents come back with excuses, such as a doctor’s note that was not turned in at school, she said.
Sometimes, the student has been sick, but the family cannot afford to go to a doctor, she said.
After Myers examination the unexcused absences disappear.
A second truancy report may require a request for warrant for the parents on a charge of improper supervision of a minor, she said. If it is the child’s fault, the child can be arrested for truancy, she said.
Fontenot said, “This is police department’s way of responding to an issue brought up by the Citizens Advisory Committee a while back and the judge about truancy.”
There is no truancy officer or school resource officers in Eunice, he said.
“Sgt. Myers fills both of those roles and handles them the best she can without being in school every day,” he said.
“This is the way it has been handled and she has been doing a pretty effective job getting the truancy problem under control,” he said.
Myers said the push against truancy began when City Court Judge Terry Hoychick found a couple of hundred parents in courtroom in the spring of 2015.
Truancy problems were not addressed until the end of the school year, he said.
“It just overloaded the court system,” he said.
And, at the end of the school year, there was no time to address the problem, he said.
Ten unexcused absences leads to failing the grade level, Myers said.
At five unexcused absences Myers now contacts the family.
“You don’t want the kid to fail,” she said.
The result is children get back into school which prevents them from failing because of absences.
Fontenot said, “We’ve done it without any extra funding and Stephanie has done a good job making it a more effective program.”
The program is also reducing the number of juvenile complaints during school time, he said.
Myers said, “We’ve actually had a lot of good responses from the parents ... that is something I applaud the parents on. A lot of them have been proactive about getting what they need to get done ... so they can be on top of their children’s education.”
For parents, conviction of an improper supervision of a minor charge can mean a fine up to $250, court costs, up to 30 days in jail or probation and 40 hours of community service, Fontenot said.
Parents also may be required to attend a family counseling program.
For the juvenile truant, conviction may point them to a 12-week boot camp, probation or state custody.
“The court has some things they can do, but a lot of time if a juvenile has truancy issues you are going to find other issues,” Fontenot said.
The key is holding parents accountable, he said.
Mitch Fontenot, Eunice High School principal, said “Parents are more responsible, kids are responsible. We are putting the responsibility on them this year.”
The principal said the school is dealing with some kids who miss 40 days of school. “There is no excuse for that,” he said.