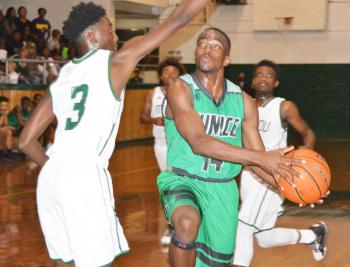 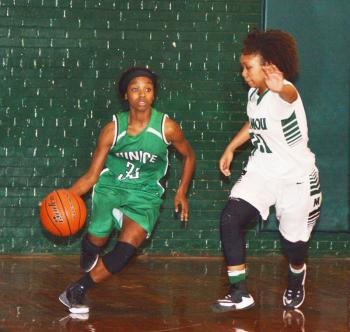 MAMOU – In an impressive showing, Mamou earned a sweep over Eunice Monday in the season opener for both teams.
The Lady Demons cruised to a 61-20 win over the Lady Bobcats, sparked by a 17-3 run to begin the game.
Mamou’s Tia Gallow scored on a put-back bucket and Darelzray Bellard hit a three-pointer off the glass to push the Lady Demons ahead, 7-0 early in the contest.
Inside buckets by Bellard and Kazhara Richard increased the Lady Demons’ lead to 12-0.
After three more Mamou free throws for a 15-0 advantage, Eunice’s Lakeera Garnett hit a free throw for the first Lady Cat point with 1:37 left in the first period.
Shaina Malveaux scored on a layup to close the margin to 15-3 before Mamou’s Richard hit two free throws to end the opening period.
Mamou began the second period with buckets by Charlie Goudeau and Richard for a 21-3 margin.
Eunice responded with a jumper by Leah Walker and a free throw from Jesslyn Reed.
Shania Malveaux and Walker drilled three-pointers to close the gap to 25-12 midway through the second period.
A steal by Walker helped pull the Lady Cats closer, but Mamou answered with a 12-0 run aided by a pair of treys from Bellard.
Walker hit a three-pointer from the corner to pull Eunice closer, 38-16 and later added a buzzer beater to make the margin, 42-18 at the break.
Mamou went on an 8-1 run in the third period, sparked by baskets from Unjel Lazard, Gallow and Richard.
Shania Toussaint hit a technical foul shot for the only Lady Cat point of the period.
With a 50-19 advantage heading into the final period, Mamou closed the game with a 11-1 run.
Richard scored five straight points and Kiajah Wilson scored four three throws to help the Lady Demons move ahead, 61-19.
Toussaint scored a free throw in the closing minute for the Lady Cats.
Richard led Mamou with 25 points, while Bellard chipped in 14 points.
Walker led Eunice with 11 points.
Eunice travels to Lake Arthur today before participating in the Kinder tournament next week.

Mamou 73, Eunice 58
Mamou jumped out to a 16-9 first quarter advantage as the Green Demons rolled to a 73-58 win over the Bobcats.
Buckets by J’seri Guillory and Brandon Ndubueze gave the Bobcats the early 5-2 lead, but Mamou answered 6-0 run sparked by baskets from Russell Edwards, Darius Tezeno and Jacob Shillow.
A jumper by Ndubueze a putback from Keithen Monday helped close the gap to 10-9, but Mamou responded with a three-point play from Tralon Arvie and trey and the buzzer by Tezeno to give Mamou a 16-9 lead.
The Bobcats battled early in the second period, sparked by five points from Guillory to close the gap to 18-14 .
Seven points by Mack Thomas, a layup by Arvie helped the Demons explode for a 12-2 run and move ahead, 30-16.
Eunice closed the half with a 5-0 run including three points from Dashawn Vigers to help the Bobcats close the deficit to 30-22.
Mamou put the game away with a 21-8 third quarter surge, begun with a 10-2 run including a trey by Thomas and two inside buckets by Tezeno.
After a put-back bucket by Monday, the Demons answered with six more points aided by back-to-back steals from Arvie.
Ndubueze scored twice to help the Cats close the gap to 49-30, but an inside shot by Russell Edwards gave Mamou a 51-30 advantage heading into the fourth quarter.
Eight points from Guillory including a trey to open the period helped the Cats close the gap to 52-38.
After Arvie scored on a put-back bucket, Guillory converted a three-point play to pull Eunice closer, 54-41 with 6:13 left.
Mamou answered with an 8-0 run, including four points from Arvie.
Dupre scored on a jumper, Monday added a three-point play and Dupre drilled a trey to help Eunice close the margin to 64-49 with 2:50 left.
A 7-2 run by Mamou increased the Green Demons’ margin to 20 points.
A trey by Guillory along with late buckets by Ndubueze and Monday helped the Cats close the game with a 7-2 run.
Guillory led Eunice with 23 points, while Monday chipped in 13 and Ndubueze added 11 points.
Thomas and Tezeno each scored 17 points for Mamou, while Arvie contributed 15 points and Edwards scored 13 points.
Eunice will participate in the three-day Port Barre tournament beginning next Monday.