Eunice mother kills her 16- and 9-year-old daughters, self 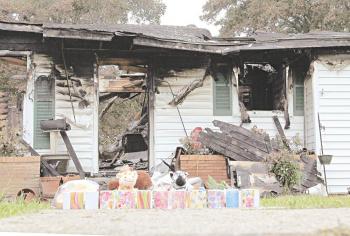 Memorials appeared at the house at the corner of 750 South 4th Street in Eunice after a mother killed her daughters, set the house on fire and then killed herself in September. (Photo by Harlan Kirgan)

Homecoming week at Eunice High started off on a sad note as students at the school learned their schoolmate Julia Watford, 16, and her younger sister Jayia, 9, had died by the hands of their own mother during a murder-suicide.
Eunice Police Chief Randy Fontenot said, “This is such a sad and tragic day for Eunice. We lost three young ladies who had roots and ties to this community. What I want to do today is bring a message to you and the family: Carla was not a bad person. She was a good mother. What led her to do this, we will never know but she was the mother of two children she loved very much and these children were good children, good girls. They had a future in this community and with their lives.”
Just after midnight Sunday, Sept. 27, the Eunice Fire Department responded to a residential fire at a Eunice home. When firefighters arrived, the home was largely engulfed in flames, and during the search and rescue efforts, the firefighters discovered three bodies. Carla Watford, 39, and her daughters were found dead in a bed in the home’s master bedroom.
Officials from the state fire marshal’s office arrived at the scene the following Monday morning to investigate the cause of the fire, and by that afternoon, it was determined that the mother shot her daughters with a handgun, set their home on fire and then shot herself. State Fire Marshal H. “Butch” Browning said preliminary reconstructions of the scene indicated that the fire was started just outside the master bedroom of the home. A letter believed to have been written by Carla Watford was among the recovered evidence, as well as a .38-caliber handgun.
A memorial of balloons, flowers and stuffed animals had formed on the sidewalk in front of the home, which has since been razed, later that day, and the marquee sign in front of Eunice High School that week read, “Julia Watford Forever a Bobcat.”
Hundreds of people gathered at balloon release at the Northwest Community Center after the tragedy to remember the young lives cut so short.
Meghan Guillory, one of Julia’s best friends said, “We love her and we will miss her. I’m about to cry just talking about it. She was always there for me.”