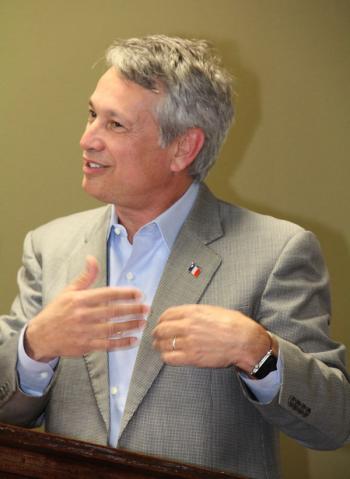 State Sen. Eric Lafleur said being Senate Finance Committee chairman has been a “nice deal” for him as far as having influence over budget and policy decisions.
“Usually you are on that committee and that’s the committee where you cannot only have influence, but you can help shape policy, particularly in your backyard. I didn’t do that in a year where you absolutely have no money,” he said.
Lafleur, a Ville Platte Democrat, noted this is his last term as he spoke Wednesday to the Eunice Rotary Club.
Lafleur rose to the chairmanship of the senate committee that acts on every appropriation in state government during a time when the state treasury didn’t match its expenditures.
“The worst thing you can do is be in government and have to raise taxes and cut spending because that makes politicians less popular than they already are and that’s what we had to this past year,” he said
Legislators had to raise between $1.6 million and $1.7 million in taxes and cut spending by about $600 million to maintain the status quo, he said.
Lafleur blames former Gov. Bobby Jindal for the financial mess, but doesn’t give himself and other legislators a pass on the situation.
In the last four to five years of the Jindal Administration spending occurred without recurring revenue, he said.
Reserve funds were raided to fill budget gaps, he said.
“Yours truly voted for many of those budgets that included those dollars because we really, quite frankly, myself and many others, felt it was futile to anything different because we would not have been able to change the policy the governor was promoting and he had the votes to promote,” he said.
Lafleur blamed the situation on Jindal’s failed campaign for president.
Gov. John Bel Edwards came into office with a goal of maintaing the status quo, he said.
“His idea was that we would at least maintain the status quo until we could figure out how we would get recurring revenue to at least current expenditures,” Lafleur said.
Sales tax were raised to highest in the nation, he said.
Sales taxes are the easiest to pass, but are regressive, he said.
“Because no matter what your income is, if you eat the same amount of food as the guy that’s making $12,000 a year and you are making $100,000, you pay effectively the same amount of taxes. So, the higher income guy effectively has a rate that is lower than then the poorer guy,” he said.
A deficit will again confront state government as the legislators meet in the spring, he said.
“The good part of what we have now is that we do have a governor that is not running for president and we have a governor who returns phone calls and visits with people and talks to people and is engaging,” Lafleur said. “We have had that for eight years.”